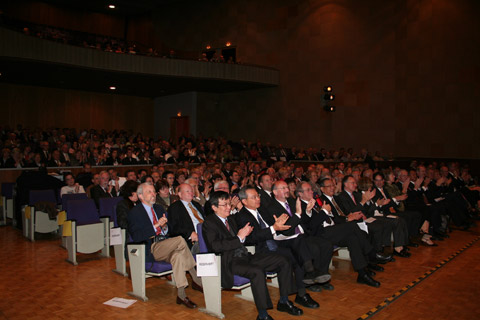 The Executive Committee meeting of KNI-BB on September 11th, 2009 have resulted in the decision for KNI-BB to become the host of ICOLD 2014 in Bali. This coincides with the fact that 20 years have passed since Indonesia last become the host of ICOLD in 1986 in an event held in Jakarta (Hotel Mandarin). ICOLD hold its annual meeting in Hanoi 2010, Vietnam. The annual meeting for 2011 was held in Switzerland and 2012 will be Japan respectively. The bid to become hosts for the 2013 annual meeting has been voted for the USA in Switzerland (2011). Voting to determine the results of this bid will be held in Japan (2012) for the 2014 annual meeting.

In order to realize this plan, KNI-BB have formed a preparatory team consisting of 32 KNI-BB members from the Ministry of Public Works, PLN (Electricity state company, as owner of the dams), Universities, Consultant and Contractors. To gain formal approval from the government, the team held a meeting with the Advisory Board and Honorary Chiefs of KNI-BB after which further discussions with the Directors of KNI-BB board of members. The team has began their promotional campaign of the bid in the International Conference on Water Resources and Renewable Energy � Asia 2010 in Kuching (Malaysia) 28-30 March 2010, and in ICOLD Annual Meeting in Lucerne, Switzerland (2011).

The Organizing Committee of KNI-BB hopes that its members will actively produce more scientific papers that help reveal the abilities of Indonesia�s own professionals in the planning, execution, operation, and maintenance of large dams. If necessary, members who need assistance in the writing of these papers in English and French following the standard of ICOLD can seek the help of the national committee. KNI-BB hopes that its efforts to improve the participation of its members can gain the support from all relevant elements.